I work for Carer Support Wiltshire as the Young Adult Carer Officer. Due to my experience of being a carer at an early age I think explains why I understand our young adult carers so well.

When I was 17 my Nan came to live with us. She was getting older and was lonely. We were quite a large family and initially it was all fine, until nan’s health started to decline, especially her mobility.

My siblings and I all mucked in and helped with all the chores. Both of our parents were busy working full time, so we all helped to run the household. I finally went to university when I was 22 and got married the same year I graduated. In that time my Grandad on my mum’s side had become ill with cancer so mum and dad brought him home to care for him too. This is also when my Nan was diagnosed with dementia.

They lived in Cornwall, I was living in Wiltshire, and it felt a million miles away. Dad worked from home and did the majority of the caring. Mum would take over after finishing her nursing shift at the local hospital. Dad would get very low emotionally and struggle with his mental health. I supported my parents as best I could and was on the phone to them every day to check in on them, especially dad.

Finally, my Nan had to go into a home. My husband and I would regularly give mum and dad some respite by having Grandad come and stay with us so they could have a holiday. By this time, we had a son, who was later diagnosed with Asperger’s. My Nan finally passed away from a stroke. I was the last family member to hold her hand.

Our daughter was born a few years later and was diagnosed with hip dysplasia when she was 18 months old. She had to have surgery and was in a cast for six months that went from her chest to her ankles. I did not ask for help as a parent carer, they were my children, and I was mum, there to look after them the best I could.

I look back now and think if only we could have had more breaks. For years, my husband and I only went away a few times. It was too unsettling for my son when he was younger to leave him, and my poor parents could not leave my Grandad. They were the only other family members that could have managed to look after him. It was an exhausting time for all.

Grandad finally went into a home when my father had a carers breakdown. Sobbing he told the social worker after twenty years of caring he could not do it anymore. I was heartbroken for my Grandad and my Dad. Not long after this my Grandad passed away at the age of 95. I was away with my husband and children at the time, celebrating that my daughter could walk again.

As my son grew older, we needed more support which came mainly from amazing friends and the schools he attended. It was not until I worked for a local charity that I started to realise the support that was available for parents who had children with additional needs. I certainly wish I had known before. Life had been very tough.

I started working at Carer Support Wiltshire in 2014 and I embraced my role with all my heart. I thoroughly enjoy my job and I so understand how stressful and emotional it is being a carer.

Last year things became tough again when my mum was diagnosed with cancer and Dad was also unwell. I packed up and went to stay with them in Cornwall. It was during lockdown, and I was still working full time but was able to continue supporting the young people I worked with remotely, from my parent’s house.

Mum had major surgery for bowel cancer. Dad was diagnosed with another condition and was poorly, as well as being very anxious and stressed about his wife. I looked after them for six weeks. I was exhausted and emotionally drained by the end.

Aware that my husband was having to manage at home and my daughter was unsettled with me being away, I returned home knowing I would not be able to go back because of Covid. I just had to phone 2-3 times a day and check in with them. It was crucifying that we were so far away.

Mum received chemo for about six months and dad struggled massively with it all. He was not able to have a break but even if he had been offered one, he would not have taken it – he would not have left her for one minute.

I have seen the impact of caring and experienced first-hand the total exhaustion mentally and physically it has on you as the carer. I believe it is the toughest job there is. I am now planning to move my parents from Cornwall to Wiltshire. The reason being is I want to look after them for as long as I can.

However, I am now armed with knowledge. Breaks are a must; well-being support is a must and when you need help, do not be afraid to ask for it. Its not always forthcoming, but keep asking. 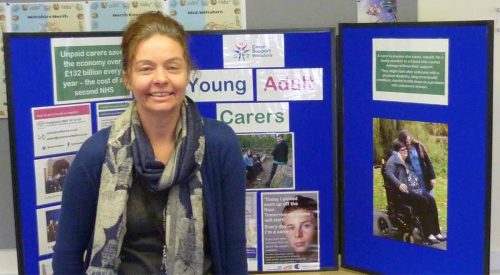