Our story started right at the beginning.

Anabel was born early and although she was fine when she was born, she quickly developed problems. After time spent in several hospitals she was eventually diagnosed with a dairy allergy and severe reflux and as she grew we added more foods, animals and medication to the allergy list. We tried preschool and school but her needs were too complicated and she became really sick, so we made the decision to home educate.

Whilst under investigation for growth problems, her doctors discovered that Anabel has a rare chromosome disorder, one of less than 200 people worldwide with the same. She now has been diagnosed with autism, hypermobility and hypotonia – her joints are too flexible and her muscle tone is too low, both causing pain. All this is believed to be linked with her chromosome disorder, though due to its rarity it’s unclear.

Being her parent is amazing, she is one awesome 9 year old. She’s caring, bubbly, creative and very funny. Being her carer is exhausting and at times really hard. Anabel rarely sleeps before 2am, she now often needs to use a wheelchair, takes regular medication and needs constant supervision. We do daily physio sessions, spend time learning new coping skills and adapt our lives to make Anabel’s easier in any way that we can.

No one expects to be their child’s carer in this way. Due to the rarity of her illness, so little is known about it. I have spent the last 9 years fighting to be heard and unfortunately faced a lot judgement as a parent and a carer, mostly due to the lack of understanding, which has really affected my confidence. But despite this I would do it all over again, she’s definitely worth it!

I never really thought of myself as a carer. When I applied to Carer Support Wiltshire for an afternoon at Westonbirt School I felt that it wasn’t deserved, I’m a parent not a carer!

But that afternoon was amazing for me, it really made me realise that I do need support and I am a person in my own right. It’s so easy to get lost in the process of caring for your child and put all your energy into becoming their support and strength, you forget your own need for support. I can’t thank Carer Support Wiltshire enough for those few hours, when I could relax and feel like myself, to recharge so that I can continue to give Anabel the best care that I can.

Carer Support Wiltshire helps many parent carers like Shona to access services, support groups, social events with other carers and respite. If you’re not already registered with us, you can register online or call us on 0800 181 4118. 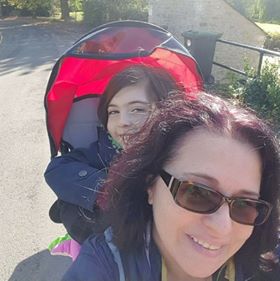