I am a full time, unpaid carer for my wife, Georgina, who was formally diagnosed with Early Onset Alzheimer’s in 2012 and, due her subsequent deterioration over the ensuing years, now has what is classed as advanced late stage Alzheimer’s.

This means that of the normal range of physical and mental ability that we all take for granted, she now only has two cognitive functions that she has limited ability to be supported with;

1.       The ability to chew and swallow, but needs assistance with feeding, by carers, of which I am one.

2.       The ability to walk, but with personal and handling belt assistance involving two carers, of which I am always one.

Coping with and managing all that this involves; mentally, emotionally, physically and financially, is very dependent on the three  P’s.

1. PLANNING. This could be something as simple and straightforward (huh!) as planning the meals for the following week, ensuring the two key criteria are met – variety, and nutrition (actually there is a third – edible).

2. PREPARATION. This involves ensuring that either I have the ingredients to hand or, if not, getting a shopping list together, including which shops I need to visit for which ingredients.

3. PATIENCE. Not everything goes to plan!

There were two major events which changed the once ‘traditional’ roles in our marriage.

I was actively pursuing my managerial career with the Post Office, which required several moves to other parts of the country.

With both children at school, Georgina now had the opportunity to pursue her own career ambitions.

This required a different approach to the typical male role on my part, and domestic chores became more ours than hers or mine. And yet, some things didn’t change.

Georgina still did the cooking (though I now helped with the preparation – well, peeled the potatoes). She still sorted out the laundry and did the ironing (apparently, coloureds and whites are not washed together!). And as Georgina was an excellent seamstress, anything that needed taking in, letting out, taking up, letting down, meant she was in her element.

As Georgina’s condition deteriorated, her ability to perform these tasks became more difficult for her. Simple processes such as how to turn on the oven, operate the microwave, remember to put washing powder and conditioner in the washing machine before switching on eluded her.

This was when the limitations of my ‘domestic’ capability really started to kick in.

Now you could say the wheel has turned full circle, but with an added twist. Being classed as advanced late stage Alzheimer’s, everything she would normally do for herself, I now have to do for her, from wiping her nose to wiping her bottom, brushing her hair to brushing her teeth, getting her showered, dried and dressed, even buying all her clothes.

Everything we would have done together, is now done by me alone; decorating, housework, hanging out the washing, making the bed (oh! the arguments we would have on the best way to put the duvet cover on). Everything I would normally have responsibility for, I still have responsibility for; managing the finances, gardening, household maintenance etc.

In addition, I now have sole responsibility for ensuring Georgina has an enjoyable, balanced and nutritious diet, thus I have had to learn how to cook. Not only that, but get to grips with the different cooking requirements for different ingredients. I have attended courses on bread making, cooking with chicken, a one day Thai cooking masterclass and a seniors half day basic cooking course. All very helpful in their own way, but none of which looked at the topic from a male perspective. Indeed at most of these courses I was the only male attending, and certainly the only male over 65.

As a result I now have a wide ranging repertoire of dishes I can call on to provide variety, nutrition and taste. My casseroles are to die for (not literally) and what I cannot do with an avocado isn’t worth doing, Baking bread and cakes is no longer a challenge, and my spices and herbs carrousels get admiring glances. Today’s bolognaise sauce with pasta becomes – with the addition of a tin of red kidney beans  and some mixed spices – tomorrows chile con carne with rice.

Despite the current Covid 19 crisis and Georgina now requiring 24/7 care and having zero cognitive functionality, she will continue to be  cared for at home, by me. On 9th January 2021 we will have been married for 50 years and no virus is going to come between us and then. 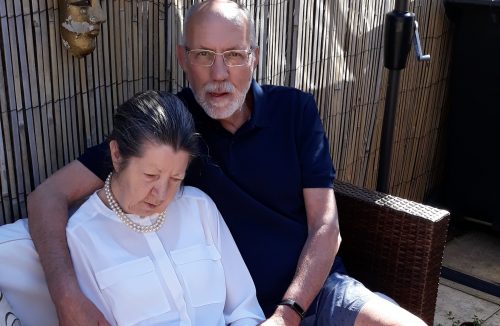